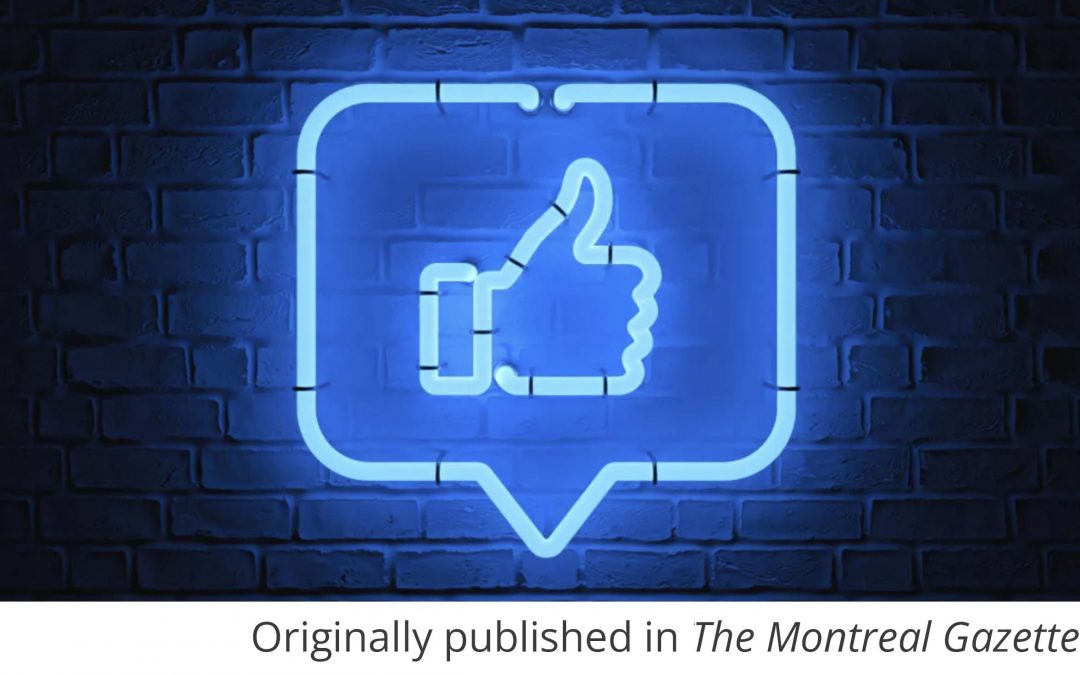 Originally published in The Montreal Gazette

Changes in private company valuations can be a bit like government debt. Throw around a few zeros on the right side and, soon enough, people stop keeping score.

MONTREAL – Changes in private company valuations can be a bit like government debt. Throw around a few zeros on the right side and, soon enough, people stop keeping score.

I remember walking out of the movie The Social Network wondering how exactly Facebook had possibly reached a valuation of $26 billion. It was pulling in less than 10 per cent of that in gross revenues. What happened next was Facebook making a mockery of that naive surprise by filing its first IPO based on a valuation of $90 billion. 90 billion?

Facebook’s gross revenues from advertising were less than $4 billion in 2011, meaning that it was now valued at almost 25 times its gross revenues. The cleavage between real revenues and perceived value was growing rapidly. By means of comparison, Apple’s valuation is now close to $500 billion, but its 2011 revenues were $108 billion, a ratio of gross revenues to value of less than five. Could it be that the logic of the dot-com hype was repeating itself? Or was something much bigger going on beneath the surface of these astronomical numbers?

Of course, Facebook is now the gold standard by any measure of online success. A recent Nielsen study revealed that users in the United States spend more than eight hours per month on the site, easily trumping all the other “stickiest” (a term meaning where visitors spend a lot of time) websites like Google, Yahoo and AOL. It is nearing one billion users worldwide. And it’s become the major player in the booming industry of virtual goods that, according to one recent study, is expected to generate $15 billion in 2014, up from $7 billion in 2010.

But that’s only part of the story. The reality is that, having developed a de facto monopoly on social networking, Facebook has included Terms and Conditions in its user contract that would have turned people away in droves had the marketplace for its services been a more competitive, decentralized one.

If you’ve ever wondered what happens to the content – text, images, videos, etc. – you create and post on Facebook, the good news is that you keep ownership of your intellectual property on it – at least technically. The not-so-good news is when you agree to the Terms and Conditions, you grant Facebook a “transferable, sub-licensable, royalty-free, worldwide license to use” any of it. For those keeping track of the legalese, that means Facebook can use its wildest discretion to do whatever it wants with it. In the whole world. Free of charge.

But wait, Facebook replies, the license does end when you delete the content or your account. Unless, the contract provision states, it has “been shared with others, and they have not deleted it.” Rewind that last part? Unless it’s been shared with others? Isn’t that the very raison d’être of the site? And who is the cryptic they who must also delete the content for Facebook to lose the license? Is it all of those who have been sent the content, or have somehow gained access to it? Arguably, yes. And the magic trick performed by Facebook’s legal department is complete. The license you grant to Facebook on the content you “own” is, for all intents and purposes, a perpetual one.

Of course, having grown to the size it has, Facebook has been forced to at least partly play the part of good corporate citizen. Privacy commissioners have even given it some symbolic slaps on the wrist. But the oft-discussed privacy issue obscures the potentially far more important one of content ownership and use.

What we are witnessing is nothing less than the largest concentration of public content in the history of mankind. The potential uses of it are manifold: commercial licensing, data mining and selling, packaging it with other entertainment products, granting access to it to governments or private companies. They are truly riveting and only limited by the imagination. That can be valued at $90 billion. And rising.

The Web 2.0 model on user-generated content is one in which the user produces, the Web service gets the value. Kind of like employees. Except users don’t get paid. Say what you will about the so-called antiquated top-down cultural production model, but at least their creators got to negotiate their rights on a case-by-case basis. In 2012, we are all the unpaid producers of the world’s next great content superpower.

What would be a better model for users? One based on common sense. Content uploaded on a website would only be licensed for use on that website. I, the user, truly own it, he/she should be able to remove it from circulation in a straightforward manner. More elaborate licensing terms could be negotiated case by case, and include compensation for the user. No small print, no invisible tentacles, no hidden, planetary potential uses. No excessive hoarding of value.

More realistically, any change to the terms of user content will likely occur through competing products in the social media landscape. Advances such as cloud computing and the increased involvement of mobile carriers open up the possibility of a more decentralized user content model. As users produce more and more content for online consumption, these questions will only get more relevant.

“Facebook was not originally created to be a company,” co-founder and chief executive Mark Zuckerberg said in a letter that accompanied the IPO filing. “It was built … to make the world more open and connected.” This statement would be best read in association with media theorist Douglas Rushkoff’s recent analysis of the Facebook IPO in which he stated that the more money a company takes on in financing, “the more obligated it becomes to function in accordance with the properties and rules of money.” Social mission and missionary utopianism notwithstanding, Facebook’s increasing valuation is no accident.

Which means that we should fully expect Facebook to continue intensifying its content grab on its best, cheapest, and ultimately, most valuable asset. You.