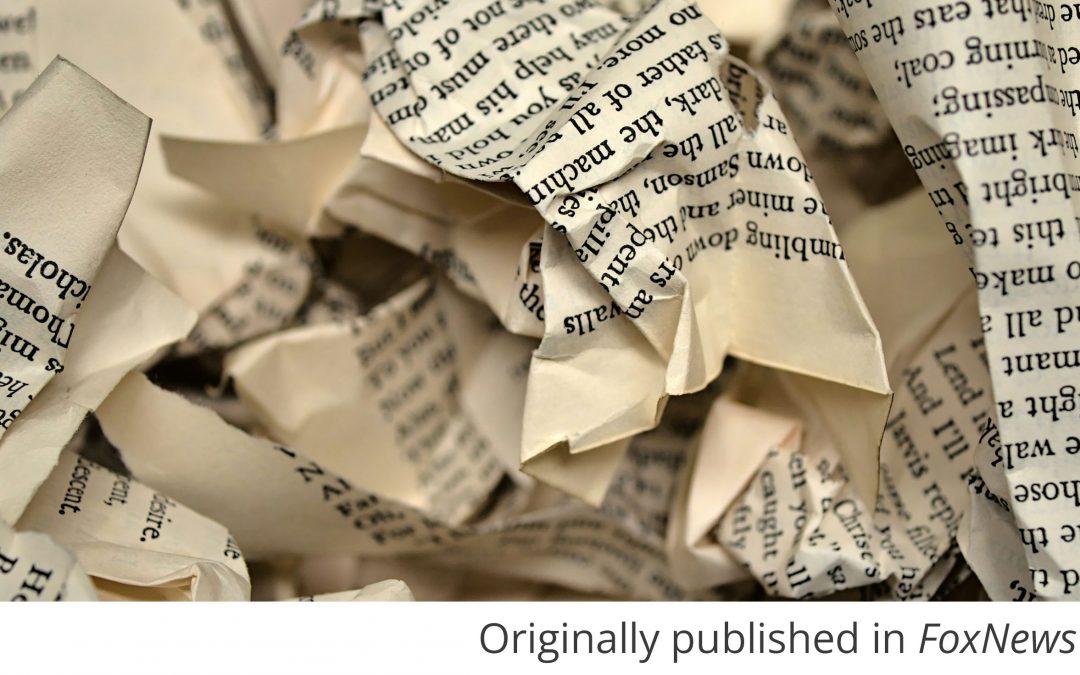 When Napoleon was deposed as emperor of France in 1814, his European rivals wanted to cut him off from the world. They banded together and exiled him to Elba Island in the Mediterranean.

When President Donald Trump was defeated in his reelection bid last November, the giant social media platforms wanted to cut him off from the world as well. In big tech’s Elba moment, they all quickly de-platformed him.

This time, censorship’s trigger moment was the Jan. 6 riot at the U.S. Capitol. Facebook’s oversight board eventually recanted somewhat and is now calling on the company to make a “proportionate response” by November. The other bans — those from Twitter, Snapchat, Instagram, Twitch and YouTube — stand.

In all, the actions cut off a former president from communicating ANY content with his 150 million  followers and subscribers — equivalent to almost half the U.S. population.

The situation seems more like something cooked up by the Thought Police in George Orwell’s novel “Ninety Eighty-Four” than anything that should be allowed to take place in the United States. We’ve long heard of ousted leaders being banned and silenced in foreign dictatorships. But not in a modern democracy.

Many solutions have been advanced to combat social media censorship. All have met with resistance. To date, all have failed.

I have a simple solution that would greatly benefit free speech if governments adopted it: enact laws barring tech companies from imposing harsher restrictions on social media than democratic governments themselves are allowed to impose.

In the U.S., this would mean a law that puts the same limits on censorship by large social media companies that the First Amendment imposes on the federal government. The amendment states in part: “Congress shall make no law … abridging the freedom of speech, or of the press.” A simple law should be enacted barring social media companies from abridging freedom of speech as well.

The First Amendment is not absolute. We’ve all heard Supreme Court Justice Oliver Wendell Holmes’ line that you can’t “shout fire in a crowded theater.” Nor can you directly incite violence. Laws and courts have also upheld other reasonable restrictions, such as in the cases of libel, slander and pornography. In an online context, there’s no doubt that doxing can be censored.

Trump haters may be rejoicing about his social media banishment, but this issue is far deeper than partisan politics. All-powerful tech giants shouldn’t have the unrestrained power to define the boundaries of online speech in a democratic society.

What if far-left Rep. Alexandria Ocasio-Cortez, D-N.Y., were banned for “inciting hatred against the rich” and seeking to replace capitalism with socialism? What if Planned Parenthood were banned for offending conservative sensibilities around the right to life?

Partisan preferences must be set aside when establishing the rules for permitted speech. It’s not appropriate to delegate this role to for-profit big tech platforms that are neither democratically elected nor meaningfully regulated.

Trump is far from the only person being banned from social media. Millions of accounts have been banned. Tens of thousands of social media employees — many of them young and entry-level — are monitoring the vast sea of social media posts and deciding what we can and can’t see, dictating the boundaries of acceptable political discussion.

Censorship is always performed in the name of a broad ideal that is supposedly meant to “protect us.” But once a rationale for censorship is given legitimacy, it tends to grow and metastasize, as we’ve seen in authoritarian states around the world throughout history.

Sadly, no vaccine can protect us against the censorship virus. The thousands of instances of censorship, big and small, perpetrated by social media’s full-time censors are a stain on our right to free speech.

Social media bans are, for the most part, anti-democratic and downright scary. Nearly 4 billion people use social media — about half the Earth’s population. No single government has ever ruled over a population as large or has ever had as much power to limit freedom of expression.

In 1927, the late Supreme Court Justice Louis Brandies wrote that even when speech contains “falsehoods and fallacies … the remedy to be applied is more speech, not enforced silence.” We could use this kind of respect for free speech today.

The tools of censorship are getting sharper and more technologically sophisticated with each passing day. In addition to outright banning some posts and some people and organizations, social media giants use algorithms to essentially hide posts, or conversely to give other posts great visibility. They can also flag posts to cast doubt on their accuracy. Dictatorial regimes couldn’t even envision such enormous power before the 21st century.

Even if well-intentioned, the tech titans are, by sheer volume, engaging in the greatest exercise in censorship the world has ever seen.

Yet, social media giants keep arguing they shouldn’t be regulated. They want to be treated like telephone companies — common carriers of information, exercising no control whatsoever over content. This is absurd. Phone companies don’t listen to our conversation and censor what we say. They don’t ban people from making calls when a comment violates what they subjectively deem to be “offensive” or “dangerous.”

The battle lines of free speech have shifted. Governments used to be the most powerful censors. Today, big tech companies are. For those of us fortunate to live in nations that cherish free speech, the best way to preserve that tradition is to impose limits on social media censorship on what we can say, hear, see and read. What better lines to choose than those that democracies have carefully crafted over centuries of legal thought?

As George Orwell once wrote: “If liberty means anything at all, it means the right to tell people what they do not want to hear.” But even Orwell couldn’t foresee censorship tools as powerful as those wielded by big tech. He didn’t give the villain of his novel, the dictator Big Brother, the power the tech titans have in real life today.

The heads of social media companies have become our Big Brothers and their staffs are today’s Thought Police. They must be reined in if we want to protect our traditions of free speech — even when it means occasionally being exposed to content we don’t like or agree with. That is, after all, the essence of free speech.